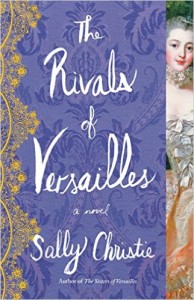 The Rivals of Versailles
by Sally Christie

Following on the heels of The Sisters of Versailles, Rivals continues the story of Louis XV’s mistresses with perhaps the most well-known–Madame de Pompadour–and those who wish to supplant her. Jeanne Poisson was a common-born beauty whose glittering future was foretold when she was 9-years-old by a soothsayer: she would be be loved by a king and become the most powerful woman in the land. This she clings to even after marriage and a child. The story chronicles her triumphs, failures and everything in between as she tries to hold onto an amorously insatiable king who falls further into debauchery as the years pass.

Among the rivals are Rosalie, a lady-in-waiting to the king’s daughters, Morphise, an artists’ model, and Marie-Anne, a relative of the king’s best-loved mistress, Marie Anne de Mailly-Nesle, who was featured in the previous book. As with the writing style of Sisters, this story is told in each lady’s voice, which gives a wider view of events and allows readers to grudgingly accept each of the women though the main character is Madame de Pompadour. Although there are several men around the king vying for power through the mistresses, the real antagonist appears to be the king’s increasing sexual depravity, as well as members of the court looking to their own ambitions. Louis is definitely no longer “the Well-Beloved” by the end of the story, and because of this some readers may be reluctant to continue with the upcoming final book in the trilogy, The Enemies of Versailles. It needs to be mentioned, however, that it will be narrated by Madame du Barry and the king’s daughter, Adelaide, and therefore probably not explicit as this one.

As with The Sisters of Versailles, I found the writing has a modern tone, but not jarringly so. Each character has a unique set of quirks and mannerisms, and the changing voices help in keeping the story fresh and moving forward. There is quite a bit of political intrigue mentioned, but mostly used as props for the main theme–being the king’s lover. In this it is a character-driven narrative, more so than event-laden, yet gives a broad enough view of the wars, social discontent and hints of the coming revolution. This book will appeal to readers of royalty fiction and especially those interested in the pre-French Revolution era.