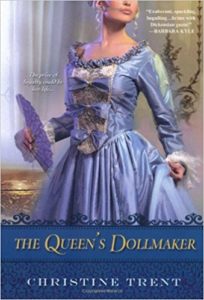 The Queen’s Dollmaker
by Christine Trent

Claudette Laurent, daughter of a prestigious dollmaker in Paris, loses everything to a devastating fire and must begin a new life. In a strange turn of events, she finds herself in London, first supporting herself as a lady’s maid and ultimately finding a way to use the talents her father bequeathed to her: that of carving, painting and dressing dolls in the latest fashions.

Though she has a few close friends and helpers, Claudette mostly keeps to herself, nursing the loss of her old life and love in France. One gentleman vies for her attentions, but she continually spurns him, as he is of higher rank and she feels he is toying with her. Throughout the story, the theme of one’s place in society is very apparent, as are the sufferings and angry voices of the coming French Revolution.

Despite the title of the book, being Marie Antoinette’s personal dollmaker is not the premise of the story. While Claudette does work on some commissions from her, and eventually meets the queen in the final years of the monarchy, most of the novel takes place in England. The author switches narration as the story builds and this is how the readers witness the revolution. Claudette does, near the later part of the book, find herself in intrigues on the ‘losing’ side and I was unable to put the book down during this part and all the way to the end.

My first impression of this book was that there was not enough background on the main character and her early family life. I was not able to grasp her reasoning, level of maturity and the general make-up of her character. I think if there were more details added on the art of dollmaking in the beginning–with her father–it would have resolved the feeling of being thrown into the story too quickly. Her mother educated her in two languages, though what we see of her is a dim-witted, scared puppy of a woman who put her only child in danger by dragging her into the fire’s path to find her husband, who was valiantly, though perhaps stupidly, trying to put out the fire consuming the entire street. He, too, I felt should have put his family first and foremost. And so, my first impression of the characterization was not great, though I knew the story had potential and I realize the author’s need to make the protagonist an orphan.

Once Claudette came into her own (her trade) and restarted her life, I was completely absorbed with the dollmaking, her business ventures and the characters, old and new, as well as the flipping back and forth between Marie Antoinette’s life and Claudette’s, just waiting for the time of their meeting and this climax that I could feel coming. If The Queen’s Dollmaker gives the impression of a rocky start, as it did with me, please give it a chance.

One interesting side story included in this novel is the elaboration of the ‘Diamond Necklace Affair’ of which I have read extensively, even an entire novel based around the conspiracy called The Queen of Diamonds by Jean Plaidy. Christine Trent’s version is exceedingly accurate and the details infallible, though leaving out the Marie Antoinette look-a-like, who was a prostitute named Nicole Leguay d’Oliva and played the role of tricking the cardinal into thinking he was welcomed into the queen’s good graces. I only mention this because I was writing an article on it once and searched everywhere for more information on the woman to no avail, and so she sticks in my mind. But, as I said before, The Queen’s Dollmaker is historically accurate with all of details of the French Revolution.

As for the dollmaking, this was my first taste of the trade and I found it interesting, as I have with so many other historical novels with characters based around a specific trade (Figures in Silk – silk making, The Venetian Mask – mask making, The Secret of the Glass – glass making, The Serpent Garden – painting miniatures, The Diamond – gem cutting, The Queen’s Bastard – horse training, etc.) If you are in the mood for French Revolution fiction and enjoy a strong female protagonist set against near impossible odds, but determined nonetheless, this is the book for you! Christine Trent has produced a fantastic first novel and I will definitely be looking for those to follow!