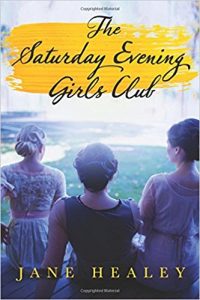 Four friends–Caprice, Maria, Ada, and Thea–from Boston’s poverty-stricken North End have been members of The Saturday Evening Girls Club for seven years. This club, which was started by a librarian and supported by a wealthy society lady with connections, helped the lower-class girls find meaningful work and even provided education grants for those inclined to it. The protagonist, Caprice (pronounced Ca-preach-ay on the audio version), had been working at a fancy French millinery for three years, and was very talented at her trade. She wanted to open her own shop in the North End–an idea scoffed at by nearly everyone, especially her Italian immigrant parents, who wanted nothing more than for her to marry a Sicilian man (any Sicilian man).

Meanwhile, Maria, the beauty of the bunch, was busy getting mixed up with the wrong crowd. Ada, the intellectual, was hiding many secrets, including college classes her Jewish father didn’t know about. And Thea, who was taking a more traditional route with mixed feelings. All of their stories–good times and bad–are intertwined into the story. Some readers will not be fully satisfied with some loose ends, although it seems the author may have purposely left some situations up to the reader to decide what might have happened; perhaps to avoid a “happily ever after” ending, or maybe to leave room for a sequel.

This is an engaging story with many details of early 20th century life in Boston. Caprice’s love life is a little frustrating, because she is an admirable character–except when she’s stuttering, heart-fluttering, and saying, “um” over and over again (all while vehemently telling herself she doesn’t like him in that way) when encountering her love interest. This book has also been likened to the movie My Big Fat Greek Wedding, and in many ways I see connections. But, as I like that movie, I didn’t mind the similar theme. The audiobook is enjoyable (except maybe the repeated use of the word “um”)!

Fun note: The Saturday Evening Girls Club (SEG) is based on a true story. From the author’s website:

“This is based on the true story of a group of young Italian and Russian immigrant women in Boston’s North End at the turn of the twentieth century. The Saturday Evening Girls Club started out as a book club run by North End librarian Edith Guerrier, but, with the additional support of Helen Storrow, it involved into something much more. The young women in the club were ahead of their time. They were poor, first generation Americans. They were also smart, strong and supportive and many of them pursued their own unique American dreams at a time when women couldn’t even vote.”