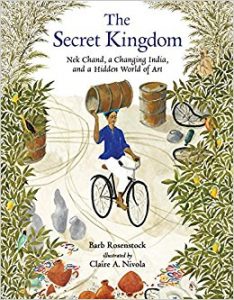 The Secret Kingdom: Nek Chand, a Changing India, and a Hidden World of Art
by Barb Rosenstock, Illustrated by Claire A. Nivola

This story follows a boy named Nek Chand as he grows up in the village of Barian Kalan in the Punjab region of what is now Pakistan. He had an ideal childhood, learning his people’s history and legends through the work and festivities of every season. When the Hindu people were expelled from the land, they traveled to India, where a disenchanted Nek hated the drab industrial landscape. Feeling nostalgic for his childhood dreams, he began building his own secret kingdom in the jungle outskirts. Years pass, and when his project is discovered, both the government and the people weigh in on the fate of Nek’s private retreat.

The Rock Garden of Chandigarh, built entirely of recycled materials, took years of collecting castoff items and painstaking work. The book includes real photos of the grounds and a detailed author’s note with a biography of its subject. The illustrations appear to be texture-rich watercolors that complement Chand’s style nicely. This is an excellent resource for educators, specifically art teachers wishing to expand their book collection to include lesser known world artists.

1 thought on “review: The Secret Kingdom”