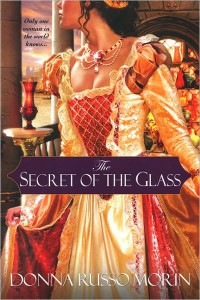 The Secret of the Glass

Based on a glassmaker’s daughter and the invention of the telescope by Galileo Galilei, the story is both a tale of a young woman’s plight when faced with an arranged marriage and a retelling of the birth of modern science.

Venetian glass has been the one of the most sought-after luxuries for centuries, and for good reason — only the glassmakers on the island of Murano knew the secret formulas and methods of creating the exquisite works of art. For this they were forced by the Venetian government to guard the secret, even on pain of death.

Sophia, the premier glassmaker maestro’s daughter, learned the art of glassmaking from her father, though it was against the law for women to do so. Thus she was constantly in danger of discovery, but as Zeno Fiolario had no son to follow him in his trade, he indulged his eldest daughter. To the family’s great sorrow, Zeno became ill and found it necessary to betroth Sophia to a nobleman, in hopes of putting the family’s fortune into good hands and furthering the glassmaking business.

As Sophia helplessly watches her father deteriorate, she becomes more acquainted with her future husband through social gatherings, where he uses her as a showpiece and nothing more. Fending for herself, she meets and befriends a poor, younger son of a nobleman and in him she finds a kindred soul.

There are many underlying themes in this story. Albert Einstein has called Galileo the ‘Father of Modern Science’ for his views on the Copernican theory, and inventions and writings. The Doge of the Venetian government at the time was open to learning and new ideas, however the leaders of the Catholic Church wanted to suppress views they deemed heretical. Galileo was constantly in danger from the powers of the Vatican and indeed was imprisoned later in life and forbidden to write or publish his ideas further.

The suppression of women’s rights is also highlighted in this novel, as women of the time were, of course, nothing more than barter for grand marriages and used for the procreation of children. Sophia is not only subjected to this injustice, but is also thrust into the society of the nobility and seen degradingly in their company because her father is a merchant. As such, class is touched on as well as gender inequality.

This is an excellent look at one of the many lucrative trades in Venice. Having also read about Venetian masks (The Venetian Mask by Rosalind Laker) and Venetian silk making (Figures in Silk by Vanora Bennett) I was excited to get my hands on yet another read along the same lines – a fascinating setting centered on interesting characters and at the same time learning the history of a trade I would not otherwise have discovered.