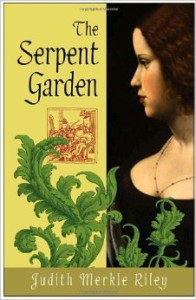 With the death of her husband, Susanna found herself alone and in debt. The only way to survive was to take up the trade her father taught her, which she gave up upon marriage — painting portraits. As a merchant, Susanna was banned from selling her work and so she passed the paintings off as her husband’s collection. Eventually her exquisite miniatures reach the notice of Henry VIII’s right-hand man, Archbishop Wolsey. Lady court painters are legal and she becomes a part of his immense entourage, personally directed by Wolsey’s secretary, Robert Ashton. When Princess Mary leaves England to marry the French king, Susanna is sent to make portraits and evaluate the art in the French palaces. She becomes the favorite of Claude, the king’s daughter and wife of the dauphin, Francois and his sister, Marguerite, Duchesse d’Alencon.

Meanwhile evil plots surround Susanna when a diabolist and members of a secret society each search for pieces of an ancient manuscript, last known in the possession of her deceased husband. Unknowingly she thwarts their efforts again and again with the help of Ashton and the angel of art. Determined to take down the Capetian dynasty, dark forces will stop at nothing to keep their secrets from reaching the cunning Wosley or the targets on the throne.

I selected this book to review from a list sent to me by Crown Publishing mostly because it is set in the Tudor court, which is one of my favorite eras. As I started to read it, the metaphysical elements turned me off slightly, because I prefer straight historical fiction, without magic or the supernatural included. However, I was quickly charmed by the author’s writing style and her characters (especially the protagonist, Susanna).

At the beginning of each chapter there is a real description of a painting (all by artist unknown) and then an explanation by Susanna as to how and why she came to paint it. It’s amazing how it all fits in her story.
Each character has a very distinct voice. Susanna is very honest, naive but not stupid, and just a very practical, likable person. She has a charming style of thinking in either short, choppy sentences or long run-ons with many repeated ands, whiches, buts and becauses.

Susanna, on French men, page 259: “He was not used to being crossed, I could tell, especially by women. French are that way, you know. Touchy. Especially about things like that. They’re always pulling out their swords because someone stepped on their shadow or insulted the way their mustache grows or something.”

Susanna’s reasoning, page 294: “Then I thought, well, maybe this is what happens to people who think unkind thoughts about husbands and then take money for lewd Bible pictures from wicked monks.”

Susanna, a run-on, page 360: “After that I thought about how it is that women don’t even have to lead men on, they just follow anyway, and what a problem it could be, only luckily Tom had turned out to have very gallant manners, unlike some of these Frenchmen who just try to push a person into a corner, like that Bonnivet, Dauphin Francis’s friend, who I saw just grab some serving maid and vanish into a dark corridor even while he was paying court to another lady and also proclaiming that he carried the pure white banner of adoration for that clever Duchess Marguerite, who was already married and not to him.”

I also enjoyed the angel Hadriel and the demon Belphagor. Once you get past the strangeness of their existence their bantering back and forth is very funny.

One of the main themes of this story is a woman’s place in the world. Susanna carries around a book called The Good wyfe’s Book of Manners and mentally chastises herself every time she has a stray thought. Even though he takes her in as a painter, Wolsey is very severe on women:

Wosley (page 122, “An unwanted thought came to him: Suppose women might express themselves with as much ability as men if they were given the same training that men had. Ridiculous.”
The descriptions of art, colors and paint-making would lead you to believe the author is an artist herself. She knows quite a bit about the subject.

This novel is a perfect combination of political intrigue, mystery and the occult. I think the most surprising thing about it is that it’s so funny. I was really expecting a serious story, which it is realistic, but just told in a humorous manner. I can honestly say this is the best book I have read since The Guernsey Literary and Potato Peel Pie Society last year. I’m adding her Margaret of Ashbury trilogy to my reading list this year.