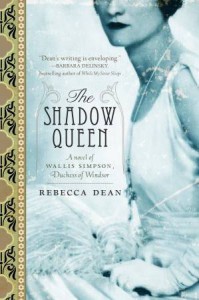 You are a woman of great destiny. The man who will love you will love you with every atom of his being. Kissed by the sun, he will be the ruler of kingdoms and you will be his shadow queen. The love you share will echo down the centuries.

Wallis Warfield Spencer Simpson is well-known for enchanting a king so thoroughly he abdicated the British throne in order to marry her. Her early life, as outlined in this intricately detailed novel, has been the object of much speculation and interest. Rebecca Dean has recreated Wallis as a cultured and captivating perfectionist, striving to live up to society standards for debutantes of Baltimore. Through a financially troubled childhood, a disastrous first marriage and a secret mission in China, Wallis creates her own unique persona and captivates everyone around her with her sparkling wit and intellect.

While she’s not overly feminine, she discovers that being different has its advantages and purposely brings attention to these attributes. However straight laced she seems, she has a taste for bad boys and despite well-meant warnings from friends and admirers, her first husband turned out to be less desirable than she had thought. Her early life and this rocky marriage are covered in detail, as well as the beginning of her second marriage to a kind (but boring) Englishman. This marriage brought her into British society, where she ultimately met Edward, Prince of Wales.

I found this a fair and believable recreation of a woman commonly reviled for her nationality and divorce record, and—of course—one who has been blamed for Edward’s abdication, though he had always been uncomfortable with his position as the next King of England. The writing style compliments the era and the settings are credible, though it focuses more on character relationships than historical detail.

Since this story only covers part of Wallis’s life, you’ll want to keep an eye out for the author’s next novel, which delves into the time between her second and third marriages, and most likely beyond. The Golden Prince, a novel of Edward’s early life may satiate readers until then.