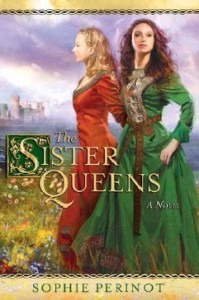 In the thirteenth century the Count and Countess of Provence produced four beautiful daughters. Though all married into either France or England and became Queens, the two eldest–Marguerite and Eleanor–were noted for their sisterly devotion, which would ultimately lead to the Treaty of Paris in later years.

Marguerite, the eldest and first to marry, set forth to France with pleasant reports of King Louis IX, her betrothed, but unwittingly walked into a court where the Queen Mother, Blanche of Castile, reigned and would spend many years fighting “the dragon” for her place. Louis was exceptionally devoted to first religion and second to his mother, the White Queen. At first the marriage was successful and Marguerite excelled at swallowing her pride and conforming to his wishes, but as time passed and she found she had neither influence nor the affectionate devotion she so desired, her feelings began to stray to a certain courtier, Jean de Joinville, Seneschal of Champagne.

Meanwhile Eleanor had married Henry III of England and enjoyed all the things Marguerite had hoped for. Henry was devoted to her, she was directly involved in politics and members of her family, called “The Savoyards” by the disenchanted English, were given high positions and lands. Henry, like his father King John before him, was not the most apt of rulers and faced many conflicts with the powerful barons. There were storms in the marriage, which made for interesting correspondence between the sisters, and it was pleasant to witness the growing maturity and life lessons as the years went by.

Before the Treaty of Paris, France and England were pitted against each other in a dispute for power over vassal states in which Marguerite and Eleanor were in opposing camps, and the matter of their youngest sister, Beatrice, marrying into France caused a temporary rift between the sisters. Through everything the sisters remained allied, though they would not set eyes on each other for nearly two decades. Frequent letters, which are chapter headings in the novel, sustained their friendship, containing wise words and carefully crafted rebukes and advice.

Though not as expansive as Sherry Jones’ Four Sisters, All Queens (which I recently read and reviewed for HNR), The Sister Queens is very detailed on Marguerite’s and Eleanor’s relationship in particular, and Marguerite’s illicit affair with de Joinville. Both are very well crafted historical novels with exceedingly fleshed-out characters. Jones’ writing is reminiscent of Chadwick, while Perinot’s writing style reminds me of my revered Jean Plaidy–that is high praise indeed from this reader. If you’re reading both novels, I would put a few books in between them so as to better distinguish the authors’ differing takes on events and exchanges, which surprisingly can make sense either way. The Queen from Provence by Jean Paidy has moved up on my list of must reads, as well as her novel, The Battle of the Queens, which features Blanche of Castile (the White Queen) and Isabella of Angouleme.