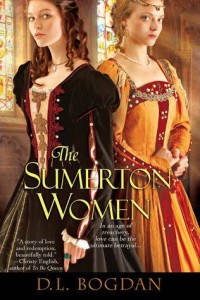 Cecily Burkhart is eight years old when she joins the Sumerton household after tragically losing both her parents to illness. Resilient and cheerfully optimistic, her presence brings much needed felicity to the topically common, yet secretive family. As time passes, Cecily learns why the castle is run by a skeleton staff and the Earl and Countess live mostly separate lives. All the while, Father Alec, who serves as chaplain and tutor, keeps the children occupied with lessons and outdoor activities, striving for a modicum of normalcy.

Thirteen-year-old Mirabella is fanatically Catholic and dreams of becoming a nun at the local convent, Sumerton Abbey. She is full of lectures and fiercely obstinate, especially toward Lady Grace, the Countess. The son and heir, Brey, is Cecily’s playmate and companion–but life at Sumerton is soon to be torn apart, a parallel to the events happening in England–Henry VIII’s break with Rome and marriage to Anne Boleyn.

This story follows the Sumertons through many years and much turmoil–though interlaced with heartwarming moments as well. Without giving too much away (which is extremely hard with this particular read) I will just say that I was completely immersed in this book from beginning to end. Not only are the characters genuine and (mostly) endearing, but the setting and historical details are immaculate. Emotionally charged scenes and believable twists accompany the characters through an unforgettable ending. This book is a prime example why D. L. Bogdan is one of my favorite Tudor novelists!