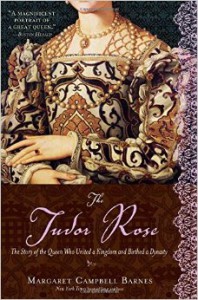 This is the story of Elizabeth of York as told in her own voice. The story begins with a mature young woman, who is the eldest of King Edward IV and Elizabeth Woodville’s children, and her character is immediately shown to be admirable. Perhaps she is a bit too compliant at times, but there is a current of obstinacy underneath her dutiful bearing.

Throughout her young years, as her hand is promised to various hopeful dauphins, dukes and princes she feels herself growing into a passionate woman and wishing for more than a cold, political match. That she felt a stirring for Richard of Gloucester both excites and repulses her, but once her brothers are widely known to have been murdered, she did what she must to avenge them. Her romantic dreams of Henry of Richmond come crashing down when she realizes that he is not one to show any kind of emotion. However, being a Yorkist, duty came first and so she became the mother of the Tudor dynasty.

This novel didn’t grab me from the first, and I think that is because the era and personages are not new to me. I’ve read many books of the era and wasn’t expecting any fresh epiphanies. By the middle of the story, however, I was on edge wondering if Barnes would write the character of Perkin Warbeck as the real Duke of York, and of course, if Elizabeth Woodville and Margaret of Burgundy had anything to do with the conspiracy.

I feel the personalities of the characters were well balanced and convincing. One surprise was Margaret Beaufort, Countess of Richmond, who has always been depicted as a shrewd, ambitious woman. Here she is shown as beautiful, kind and understanding, which was refreshing. I enjoy seeing characters turned completely around (within reason, of course) in fiction.

While not compelling enough to be considered a page-turner, it is well written and I enjoyed yet another take on the Wars of the Roses, but I don’t believe it will be as memorable for me as some other books of the genre.