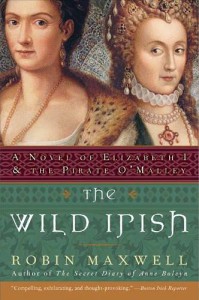 In 1593, Grace O’Malley, Mother of the Irish Rebellion, famously met with Queen Elizabeth I of England with a petition to set her son free of Elizabeth’s English-Irish governor and a few other concessions. Robin Maxwell takes this historic event and turns it into a retelling of Grace’s life, from a young girl sailing on her father’s ships to a woman of 60, hardened by war, grief and endless fighting. ‘The Wild Irish’ is an apt title for this novel, as there is no sugar coating the gory, harsh treatment of the Irish within their own rival clans and later the English to the Irish, and vice versa. While it’s easy to commiserate with Grace, there is such incivility among the Irish that one can see the side of the English objectively, though the author is giving a sympathetic voice to the Irish cause.

More than just a story of the life of Grace O’Malley, The Wild Irish interweaves the relationship of Elizabeth I and her last favorite, Robert Devereux, Earl of Essex. Having read his particular story recently in My Enemy the Queen (Victoria Holt) I had some background information and a differing view of the situation; that of his mother, Lettice Knollys. As told in The Wild Irish, we see a man who is consumed by the need to prove himself in battle. Unfortunately his lot is riddled by failure, either owing to lack of funds, unpredictable weather, harsh conditions, disease and sometimes improper management. Disenchanted with his initial intentions, Essex succumbs to self-pity and ruins his health by contracting syphilis, which causes not only bodily discomfort but agonizing periods of delusions and mental incapacity. While Elizabeth turns away from him, he finds a friend in Grace O’Malley, even though she is on the opposing side and spends her days transporting goods from Spain for the Irish rebels.

There are so many details to this story when the focus is on Ireland, its clans, chieftains and titles. Not having read anything on Ireland before, I was a bit lost at first, but it does come together and make sense. Grace is a very likeable character and her quips keep the story moving along. Just when you think you’ve had your fill of Irish rebels, the narration returns to Elizabeth or Essex and gives a reprieve of endless battle scenes. As most men would agree, this is just the kind of story that makes a great action flick.

It was a bit surprising to see Elizabeth go from protagonist in the first three of Robin Maxwell’s Elizabethan quartet to the villain, but we see her much more clearly by the end of the book. She is more complex a character than Grace, and I feel the reader can appreciate this depth, if one cares to philosophize. I was a bit sad that Arthur Dudley didn’t turn up by the end, at least to ease his mother’s passing, but the ending was summed up well, with a reference to all the major players and how their lives ended, in regards to their family, careers and stations in life.

The Irish, still wild and uncontrollable, were bequeathed to James VI of Scotland, who became James I of England. Though previously, in an attempt to strengthen his claim to the English throne (as Elizabeth still had not named her successor), he promised more levity to the Irish to gain future support. With this last tidbit of information, the story ends upon Elizabeth’s death – ironically the same exact year that Grace O’Malley, in many ways the rival who replaced Mary, Queen of Scots, herself passed away. The sixteenth century, particularly under Henry VIII and Elizabeth I, saw Ireland live through one blood-bath after another and was the most devastating time in Irish history, in regards to loss of life, livestock and landscape.

Though this is not my favorite Robin Maxwell novel, I have come away with a new understanding of the political maneuverings of the Tudors toward their ‘wild’ neighbors and question their authority to do so. I always enjoy a book that makes me ponder the history and desire further research and The Wild Irish is one such book!