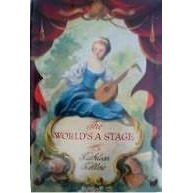 The World’s a Stage

18th Century Irish actress Peg Woffington and actor/manager David Garrick are brought to life in this rather hard-to-find novel by Kathleen Kellow (a pseudonym of historical author Jean Plaidy). Peg began life in a poor home without a father, and found her calling at an early age. She rose to fame in Ireland playing in a juvenile show that was ultimately shut down by the sanctioned theater, who quickly took Peg into their troupe. There she met a gentleman who later gained her entrance to Covent Garden in London.

She was already the most famous actress of her day when she met David Garrick, who at the time was simply a wine seller and aspiring actor. Theirs was a troubled affair, as he desired respectable marriage, while she enjoyed her freedom. Though they shared an intense love for acting, they ultimately found it easier to live separately, though their love would endure for many years.

This was a time of great change in the theater world, regarding the style of acting, and was in fact ushered in by the couple, along with another actor of disreputable reputation—Charles Macklin. Together they created a new form of acting, embracing a natural style that left many of the veteran managers, playwrights and actors shaking their heads. Garrick’s newfangled depiction of Shakespeare’s characters brought him fame and fresh material for the eager public.

I was not quite as impressed with this novel as Rochester, the Mad Earl–another of Kellow’s novels that never made it into reprint—but that could be due to the setting and characters themselves. The writing is consistent with her style and it’s of special interest to some readers due to an uncommonly written era. King George II makes one appearance, but in general, since he was away from England much of his life and not a popular monarch, there is less interest in the mid-18th Century for historical novelists—especially when compared to the upcoming Regency era.

This is a nice addition for a serious Plaidy collector, but I wouldn’t think any other reader would find it quite worth the effort and expense of locating such a rare book.