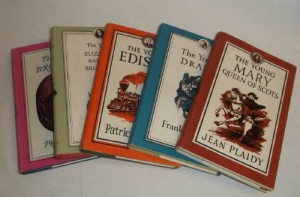 The Young Mary Queen of Scots

This is one of three Young Adult novels by Jean Plaidy in Max Parrish’s “The Young” Series.

As in her novel Royal Road to Fotheringhay, Plaidy begins with Mary, Queen of Scots at the age of five. Scotland was in danger of being invaded by the English, who wished the young, fatherless Queen to be taken to the court of Henry VIII and eventually married to Prince Edward. However, she was whisked away to the island of Inchmahome and later sailed to her mother’s homeland, France. Instead of an English alliance, she was betrothed to the dauphin—the delicate eldest son of King Henri II and Catherine de Medici. Life at the French court was enchanting, except for the frightening Queen, who took every opportunity in embarrassing the Queen of Scots. There were also her power-hungry Guise uncles, who relentlessly steered her to policies that served their interests. This story, based solely on her younger years, ends with Mary leaving France for Scotland after the premature death of her first husband, King Francois II.

One very blatant absence is the character of Diane de Poitiers, who was not mentioned at all in this story. I am assuming this has to do with the fact that she was a “mistress” and was not considered fit for children to read, even though Plaidy’s descriptions of this sort are always vague anyway. Lady Fleming’s dalliance with the king was also not included—only the Queen’s displeasure with her role as governess and the lady’s departure to Scotland.

This book is increasingly hard to find, having been first published 50 years ago, though a paperback version was released in 1972. Plaidy also wrote a book in this series for Queen Elizabeth I as a young girl, and Meg Roper, the daughter of Sir Thomas More.