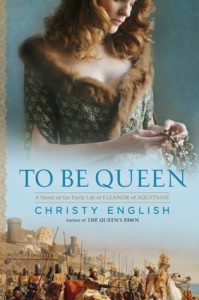 This is a re-imagining of the early life and first marriage of Eleanor of Aquitaine. Alienor, as she was known by people of her duchy, was a young girl of eight when her father started grooming her to become Duchess after him. He had no living son, yet he saw welcome cleverness in his politically minded eldest daughter, and had no qualms about leaving Aquitaine and Poitou in her capable hands. First, however, he planned to marry her to the son of the King of France.

Unlike Eleanor, young Louis was not prepared to step into his father’s shoes, as he had been destined for the church. As fate would have it, his older brother died in an accident and he was whisked away to learn the art of kingship. It did not come easily to him, and he spent many years under the thumb of the churchmen, who were only too pleased to have a malleable king on the throne.

Though Louis’s weaknesses and his naivety were immediately apparent to Eleanor, she tried to guide him and sway him to her side. He had the utmost respect for her, but still did not allow her to hold the reigns of the kingdom, owing to the fact that he always put his faith–and the churchmen–first. When it was established that they were to go on crusade, Eleanor found the freedom of spirit and adventure true to her nature, and so set her mind toward a permanent separation from the man who could never fulfill his role as her husband.

This is the story of Eleanor’s awakening. Though she was never a meek woman, she accepted her role as wife and tried to hone the marital relationship she desired. Through her honest words and with intriguing psychological insight, we meet the woman who was known for her passionate nature, cleverness and amazing endurance.