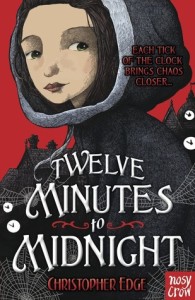 Twelve Minutes to Midnight
First in a Triology
Shadows of the Silver Screen, The Black Crow Conspiracy
by Christopher Edge

London, England 1899. Penelope Tredwell is the orphaned thirteen-year-old owner of the magazine The Penny Dreadful, in which she writes under the wildly popular pen name Montgomery Flinch. This story takes readers to Bedlam, London’s institution for the mentally ill, where the patients have suddenly become frenzied at 11:48 PM every night, furiously writing indecipherable messages in a trance-like state. Penelope and Monty, the actor she employs to publicly portray Montgomery Flinch, are summoned by the Physician Superintendent of the Bethlem Hospital with the hope that England’s most famous horror and mystery writer has any clues as to the causes of the strange occurrences.

Penelope’s path takes her through the streets of London to the Museum of Natural History, and a connection with its widowed benefactress, Lady Cambridge, drawls her into a web of danger that borders on the unbelievable. The fate of the future of the entire world depends on Penelope’s wits and ability to solve the outlandish mystery.

It is fitting that I finished up this story on New Year’s Eve, as the story itself culminates on December 31, 1899–the dawning of a new century. While the scientific and supernatural details of the story may have some level of implausibility, the imaginative reader will appreciate the charming characterizations, fast-paced action and descriptive settings. Having read the third in this trilogy beforehand, I expected as much and was able to enjoy this volume without questioning the validity of the details. For its aimed audience–ages 8 – 12 years–it is a highly readable and appropriate Gothic mystery.

My review for the third in the trilogy, The Black Crow Conspiracy, originally featured in Historical Novels Review.

An action-packed and engaging read from start to finish, this is the third of an early Edwardian era trilogy featuring a young girl who happens to be a celebrated author of horror for the magazine Penny Dreadful. Fifteen-year-old Penelope Tredwell, however, hides behind the pen name of Montgomery Flinch and masquerades as his niece, employing a clever actor to play the part in public.

In this latest adventure, Penelope has been suffering from writer’s block for many months and comes up with the idea of a contest in which her readers send in their own story plots. Among the many entries, she discovers one intriguing tale that is signed only with the drawing of a black crow. Once her version of The Thief That Wasn’t There is printed, she finds herself and her friends in trouble with a detective from New Scotland Yard for a crime that had been committed exactly as described by the illustrious Montgomery Flinch—the theft of the crown jewels just weeks before the new king’s coronation.

With a scientific twist and a plot involving the royal family, the story may seem a bit far-fetched, but moves along quickly with humor and wit. The characters each have distinct personalities that complement the early 20th-century London setting. An immensely satisfying ending sadly concludes this charming series of escapades, but leaves an opening for perhaps a different spin on the lovable characters.