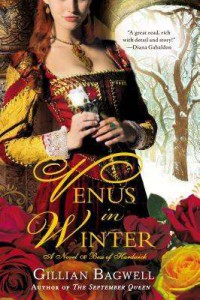 Based on the little known early life of Elizabethan lady Bess of Hardwick, this novel spans three decades during one of England’s most perilous eras. Through the eyes of an impoverished girl turned great landowner, the events surrounding the courts of Henry VIII, Edward VI, Mary I, and Elizabeth I are brought to life, with descriptions of religious divisions, marital disputes and political intrigue. Bess, who married four times, increasing her fortune and status with each, was also victim to misfortune as she witnessed many friends and loved ones suffer during the turmoil of the Reformation.

The beauty of this story is that it does not cover the time period for which Bess is famous—acting as keeper of Mary, Queen of Scots, along with her fourth husband, George Talbot, the Earl of Shrewsbury—but fleshes out her younger years from childhood. It’s such an interesting story that it kept this reader up late a few nights! I highly recommend it for Tudor fans and those looking for a view of royalty through an honest and intriguing character rarely found in historical fiction.