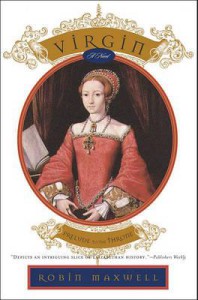 Virgin: Prelude to the Throne

I knew I’d like this one, as I’ve liked all of her novels. She has a distinct writing style that includes plenty of drama, yet stays true to the facts.

The story begins with the death of Henry VIII. Elizabeth is relieved when she is sent to live with the Queen Dowager, Catherine Parr, at her residence in Chelsea. Elizabeth receives a new wardrobe, the best tutors and the adoration of her beloved step-mother. But it all comes crashing down with the arrival of Thomas Seymour, newly appointed Lord High Admiral. He sweeps Catherine off her feet and secretly marries her, risking the disapproval of the Regency Council, and perhaps more importantly the man running the government for young Edward VI — the Duke of Somerset. Thomas, as uncle to the King and brother to Somerset, felt he was untouchable and continued with his wild schemes and antics.

Charming as he was, every move he made was for one purpose: to be the power behind the throne, or become king himself through marriage. Elizabeth, not immune to his charms, begins a dangerous infatuation with Thomas. To his delight, several opportunities present themselves to help him with his plots against his brother and much intrigue ensues.

Though most of you probably know how this story ends, I’ll leave my synopsis at that. Elizabeth’s character did not surprise me, as I have already read the 2nd novel in the quartet, The Secret Diary of Anne Boleyn. Virgin sets up the negative attitude she has toward her mother, which is then expanded upon in the next book. It was enlightening to see the roots of her thoughts on that subject. The depiction of Catherine Parr and Thomas Seymour was, however, new to me. Catherine seems a different person under Thomas’s spell, and he is simply detestable. I really liked the character of Robin (Robert) Dudley in this one, though if I remember correctly I didn’t care for him in The Secret Diary of Anne Boleyn.

Though Plaidy’s Queen of This Realm is still my favorite novel on Elizabeth, this one is an excellent read on her younger years. I also recommend The Secret Diary of Anne Boleyn, which Anne Boleyn fans will appreciate for its fair portrayal of both women. The Queen’s Bastard is sitting on my shelf waiting to be read. There is another book recently out along the same lines — The Virgin Queen’s Daughter by Ella March Chase — but I think I will finish up Maxwell’s trilogy first.