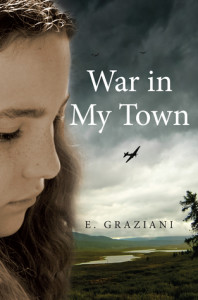 War in My Town
by E. Graziani

Bruna Pucci is an eleven-year-old girl living in a small village in northern Tuscany, Italy. The story opens in 1940 with Bruna’s everyday life–going to school during her final year, doing chores and enjoying spending time with her mother, six siblings and neighborhood friends–and takes readers through the end of World War II. Bruna’s village, Eglio, is a small, mountainous area that went untouched by the war until the Spring of 1944 when Nazi soldiers marched in and occupied the town for an entire year. Eglio was bordering the “Gothic Line”, which was one of the last European fronts during the war. This small Italian village’s people were already suffering from food rationing and the absence of most of the village men, who had been called to fight by Mussolini in the Italian army. Now they were not only asked to house and work for the German soldiers, but became human shields when the Allied Army began bombing.

Although listed as fiction, this is in fact a memoir written by the protagonist’s daughter. The author states that all events and characters are true to history, although the book contains dialog that is mostly likely an invention, or at least based on paraphrasing. Possibly because the story is from a first-hand account, the character of Bruna molds perfectly into story, with believable actions and thoughts. Her perspective of Mussolini’s governance in Italy reflects that of a common Italian at the time, and as the war persists and affects Bruna’s loved ones, the natural turning to the partisans. There is necessary story build-up, action and a terrifying climax, and a satisfying ending–everything needed for a great young adult read! The author has included a preface, map, photos, and an author’s note.