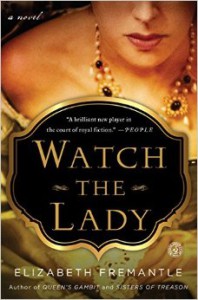 Penelope Devereux, daughter of Lettice Knollys, the woman Queen Elizabeth I called the “She-Wolf” for marrying the royal favorite, is pitted against the Essex faction’s rival, Robert Cecil, in this panoramic Tudor narrative. Penelope, beautiful, level-headed and witty, makes a perfect waiting lady and voice for the out-of-favor Devereux family, though it is her brother who catches the Queen’s attention.

Robert Cecil, son of the Queen’s most trusted advisor, Lord Burghley, has loathed Robert Devereux since childhood, when the latter joined in to bully the physically weak Cecil. Thus an enmity existed when they each became an important fixture at court. Penelope, ever her brother’s champion, lead the family through the tangle of intrigues, deftly extracting herself from scandal time and again. Cecil, however, recognized her as the intelligent schemer she was, but was also devastatingly attracted to her. He continuously warred with himself over his desire to bring the family down.

At over 500 pages, this is a detailed story, but one that holds the attention and doesn’t unnecessarily lag. Penelope is an interesting lead with her relationship with the poet Philip Sydney, and famous role as Stella in the sonnet Astrophil and Stella. While this builds her personality, she is a character who grows up within the pages–probably all the more noticeable next her brother’s instability. Cecil, also intriguing, has redeeming qualities while dealing with his own demons. Their political tête-à-tête becomes the main theme of the story, and even if the reader isn’t quite taken with the Essex agenda, Penelope remains the true protagonist.

The only possible issue with this book is its size, but as it doesn’t bore, this isn’t a problem for voracious readers. Historically sound details, expertly crafted dialog, and a satisfying pace set this novel apart from others in the genre. It is highly recommended for Tudor enthusiasts–especially those interested in the twilight of the reign of Queen Elizabeth I, and the lesser-known character of Robert Cecil, 1st Earl of Salisbury.