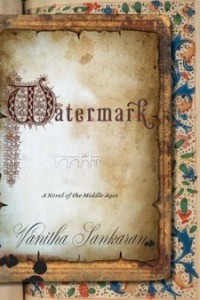 14th century France: Auda, born albino and rendered mute by a superstitious midwife’s servant, grew up motherless though much beloved by her father and older sister. Not knowing the details surrounding her birth coupled with being an outcast in society due to her appearance, she was unable to develop a sense of self. Though she could not speak, she could do something other girls of her class could not–read and write– which was a necessity for communication, but also a gift her father would have given her anyway.

Auda’s father was a papermaker and part-time scribe, and at the time there was little demand for cheap writing materials, as the churches and noblemen could afford parchment. A market opened up, however, when torrential rains ruined crops and farms. Famine also brought the Inquisition–to find the heretics they believed had brought the wrath of God on the land.

Just as the family’s business started picking up, Auda was offered a position with the town’s highest lady, the vicomtesse, copying documents onto her father’s paper. Since the church was busily looking for heretics and Auda’s mere appearance was suspect, she was much safer under the protection of the nobles. The discovery of a collection of old verse from the time of the troubadours sparked an interest in Auda and her life began to revolve around reading the poems and writing her own.

This part of the book was unexpected–I had envisioned a book based mainly on religious persecution–not a woman’s place in society and much lamenting on the unfairness of it. However it does weave back into the original theme by the end of the book. And, to be honest, I was in the mood to enjoy some ‘man bashing’.

This is the story of a young woman ostracized her entire life, yearning for her lost mother, but ultimately finds the answers in age-old writing and through her own talents with a pen. Questions as to the ways of the Catholic church and other emerging religions are mused on, but a girl finding her inner voice is definitely the major theme of the story.
I enjoyed this read and recommend to those who have an interest in the pre-Reformation Catholic church and early Inquisition. Reading the introductory chapter on the author’s website is really what sparked my interest in this book and though it took an unexpected turn, it was not an unfavorable one.