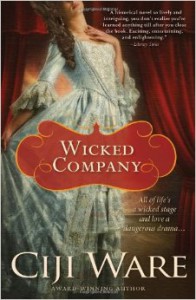 In mid-Eighteenth century London, during the early reign of King George III, our protagonist, Sophie McGann is the daughter of a Scottish printer and bookseller. Forced to make her way, she employs her talents as a printer and playwright in the cut-throat arena of the Drury Lane theater and its competitor, Covent Garden.

Sophie’s guarded, though pleasant, personality serves her well as a single female in a male dominated world, though cannot keep trouble completely at bay. She must make decisions that advance her best interests, but do not upset her conscientious nature.

She is by no means the only ‘petticoat playwright’ during her time–in fact she is quite enamored of the celebrated Frances Sheridan, wife of playwright Richard Sheridan–and many of the actress/playwrights are rivals to even Sophie herself. Even so, women are looked down upon by men in the business, and sometimes must take on either a male or anonymous pseudonym to make it through the censors.

One of my favorite characters in this novel is David Garrick. He is very kind and understanding of Sophie’s plight and uses her both her printing skills to produce playbills and her writing skills, even if she cannot put her name to the works.

From Edinburgh to London, Bath and even Wales, this story reminds me much of the classic Forever Amber by Kathleen Winsor; it has the same epic feel and intricate historical detail, but with an admirable protagonist. I’m pleased to have finally read a book of this era not centered on royalty, and couldn’t ask for a more exciting backdrop to Sophie’s story than the world of the London theater!