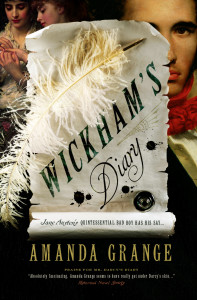 This Pride and Prejudice novella focuses on George Wickham, infamous bad boy from Jane Austen’s original. As the son of Pemberley’s steward, George was never treated with the same respect as Fitzwilliam Darcy, though he possessed more graceful manners and a pleasant countenance. At first he thought this, along with his Pemberley connections, would be enough to secure him an heiress. When the deaths of old Mr. Darcy and his own father thwart his ambitions, he finds the lifestyle choices he had made during his years at Cambridge have damaged his prospects. Through diary entries we discover his past–his thoughts and motives reveal an uninspiring protagonist who cannot be redeemed, though it seems the author tried (a bit).

This is a novella, and I expected it to be short, however, I did not expect it to end before Pride and Prejudice even began. Wickham’s claim to fame is his presence in Meryton and subsequent relationships with the Bennet sisters, yet we only see up to his ‘almost’ elopement with Georgiana Darcy. Futhermore, Darcy’s alluding to missing something in his life–repeatedly–is only understandable if you are familiar with P&P. Any reader who picks up this book without first reading Jane Austen’s novel will never know what that missing something is, because it’s not explained.

This could have been a very interesting book–I had been looking forward to it–but it fell short of my expectations. A little more detail and an ending stretched to (at least) where P&P ended would have made this a very worthy Austen companion. I’ve enjoyed other Austen inspired ‘diaries’ by this author, and I will not give up hope that this one will be revised and plumped up with more details. But, for the record, it was an enjoyable 2 hours of reading. If you’re looking for a short, fun read, give it a try!