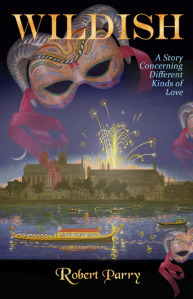 Set in Georgian England during the Jacobite Uprising of 1745, this is the story of Matthew Wildish, Master Wig Maker, socialite and something of a ladies’ man. Though he is not a titled gentleman, he moves in the most elite circles and has befriended many people in high places, however is still in the unique position of mixing with those of lower classes as well. This distinction serves him well in many facets, as one of his side-jobs consists of passing along information on those who may be a threat to the Hanoverian King George II.

Matthew, with a little prompting from his muse, Johanna, begins working on a set of poems that will represent the seven celestial bodies (The Sun, The Moon, Jupiter, Mercury, Saturn, Mars and Venus), and more literally seven women with whom he hopes to enjoy within a single day. This part of the novel—his conquests—which takes up much of the first half, for me was not the most interesting aspect. It becomes much more intriguing when a quirky, little link-boy starts showing up at strange moments just when Matthew needs helping-hand and the London begins to panic in earnest as a result of the impending danger from Scotland. Suddenly life is not so rosy and Matthew finds he must set aside his personal plans to keep himself and his friends from danger.

Although ultimately Matthew’s amorous predilections turn into a great farce, it was an awkward introduction to his character. Much of the early material is essential for character building however, and I won’t hold it against the author—but will say it may turn off some more picky readers. I think Matthew finally grew on me when he made the decision to journey into enemy territory with a wild plan and no personal gain in mind.

This is an excellent account of the “Forty-Five Rebellion” lead by Bonnie Prince Charlie, Charles Edward Stuart, the ousted King James II’s grandson—also known as the Young Pretender. The mood of the people, the two opposing sides and the gruesome details of the battles are minutely described to the very conclusion of this final Jacobite uprising in England.

At 585 pages, this is definitely not a quick read but the pages seem to speed by as you’re immersed in the storyline. As there are not many historical novels set in this time period it is a refreshing break from the Plantagenets, Tudors and Borgias. If you’re looking for an involved, yet humorous read, with a bit of adventure and eccentricity mixed in, this novel will satisfy. I really enjoyed it! (said the actress to the bishop, what?)