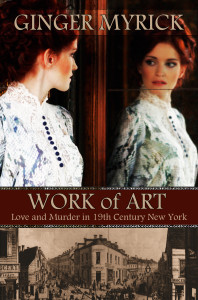 Del Ryan is a young Irish immigrant eking out a living for herself and her invalid mother by serving as a companion to an aging socialite. She has little in life, but nonetheless is happy with her humble existence, enjoying friendship with her fellow workers and a few neighbors, as well as her sometime hobby of drawing and painting. She never thought her world would change, and in such an extraordinary way, when she meets Cillian Arthur–an upper class gentleman who is seemingly perfect and somehow decides to court the impoverished girl from the rough and dangerous Irish neighborhood, Five Points.

While Jimmy Sheehan, Del’s childhood friend, and Cillian vie for Del’s attention, there is a sinister atmosphere in the poorer areas as a succession of women are found strangled, and all seem to have a connection with the trio. Prone to vivid dreams that often foretell the future, Del becomes privy to disturbing clues as to the identity of the murderer, haunting her waking hours. She reluctantly comes to terms with fate, though something deep within her continually fights her sound reasoning about the sudden changes in her once mundane life. She must ultimately decide who to trust and how far she should go in giving away her heart and ensuring a better life for her mother and herself.

While this is something of a historical mystery, it is also a story about family, friendship and love with many heartwarming moments–taking away from the macabre theme of the story. The setting and tone is perfect for the characterization, and the author keeps the reader guessing the identity of the murderer to the very end. This is another great read from a talented author, and shows her obvious skill in writing a different genre. It is recommended to mystery, romance and historical novel fans!