There are three “Princes in the Tower” novels that have intrigued me over the years: To the Tower Born by Robin Maxwell, Figures in Silk and Portrait of an Unknown Woman by Vanora Bennett. All three make use of a background character’s view of events, some fictional–such as Bennett’s Isabel Lambert and Maxwell’s Nell Caxton–and others who were indeed on the fringes of the court during the era–Elizabeth of York, Jane Shore and Meg Giggs. While To the Tower Born and Figures in Silk are set during the era, Portrait of an Unknown Woman is indeed a Tudor novel set in the 1520’s, but has roots that lead back to 1485 via Thomas More, known for slandering Richard III in his book The History of King Richard III.

This trio of books make for very interesting reading, prompting you to look for more “clues” and information long after the story ends, and are my recommendations if you’ve caught the Richard III bug after the great discovery in Leicester. 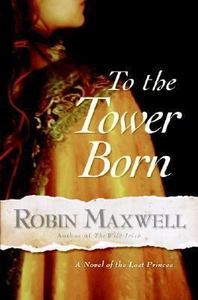 To the Tower Born

“In 1483, Edward and Richard of York—Edward, by law, already King of England—were placed, for their protection before Edward’s coronation, in the Tower of London by their uncle Richard. Within months the boys disappeared without a trace, and for the next five hundred years the despised Richard III was suspected of their heartless murders.”

In To the Tower Born, Robin Maxwell ingeniously imagines what might have happened to the missing princes. The great and terrible events that shaped a kingdom are viewed through the eyes of quick-witted Nell Caxton, only daughter of the first English printer, and her dearest friend, “Bessie,” sister to the lost boys and ultimate founder of the Tudor dynasty. It is a thrilling story brimming with mystery, color, and historical lore. With great bravery and heart, two friends navigate a dark and treacherous medieval landscape rendered more perilous by the era’s scheming, ambitious, even murderous men and women who will stop at nothing to possess the throne.

“This novel brings together the silk business of fifteenth-century London and the personality of King Richard III, suspected throughout history of having murdered his two nephews, the Princes in the Tower. The story begins with silk merchant John Lambert’s decision to marry off his two beautiful daughters at the end of the Wars of the Roses. Elder daughter Jane starts a notorious liaison with King Edward IV – Richard’s older brother – while her sister, Isabel, as the new silkworker to the court, becomes privy to its most intimate secrets. Could the sisters hold the keys to power at this time of uncertainty?”

“It is 1527. The English Renaissance is in full swing under the young King Henry VIII. The young German painter Hans Holbein, who has come to London to seek his fortune, is delighted when he gets a commission to paint the family of Thomas More, one of England’s leading statesman and men of learning, at his country home in Chelsea. The story, seen through the eyes of More’s young ward Meg, is framed by the two portraits Holbein will paint of the family – the first when Thomas More is about to become Lord Chancellor and is at the peak of his powers, and the second, seven years later, after More has resigned his job in protest at the King’s decision to divorce his first wife, the Spanish Catholic Catherine of Aragon, and marry the Protestant Anne Boleyn. With disaster looming for the Mores, Holbein’s genius for truth-telling through his painting brings out all the family secrets in the second of the portraits.”