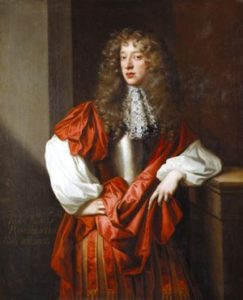 John Wilmot, Earl of Rochester (1647-1680) appears in all four of my royal mistress books. To some of these ladies, he was an annoying gadfly, and to others, a devoted, amusing friend. To Katherine Sedley, the heroine of The Countess and the King, he was the kind, droll friend of her father. Either way, he was undeniably one of the most unforgettable and most tragic figures of Charles II’s Restoration court.

Rochester’s father, Henry Wilmot, was a royalist officer in the army who earned his earldom by helping the soon-to-be Charles II escape Parliamentary forces. Though Henry died in the future king’s service, Charles remembered his loyalty, and always regarded his son with almost filial devotion.

But the boy had gifts beyond the king’s favor. First of all, forget Johnny Depp, who played Rochester in The Libertine. I know that’s hard to do, but the real Rochester was tall, thin, and fair-skinned with light brown hair. (Also forget that tin nose that Depp wore at the end of the movie – that, too, was an invention.) He was also extraordinarily beautiful. When he first appeared at the palace in 1665 as a precocious courtier of eighteen, he was described as “one of the handsomest people in England,” and called “that noble and beautiful count.”

He was also well-mannered, intelligent, and well-educated, having studied both at Oxford and abroad. He had immense personal charm, which made him win the hearts of both women and men. Most memorable of all was his quick and often scathing wit, and in this court, where wit was prized, the ability to deliver a devastating insult in the form of a neat couplet made him an instant favorite. He was always ready for pranks and jests, and with an accomplice like Nell Gwyn, he could make the king roar with laughter. All Rochester lacked was a fortune to support his titles, but that he soon remedied that by eloping with one of the prize heiresses of the day, and actually seemed to have loved her as well as her money, too. They soon had three beautiful children, whom Rochester loved dearly. He seemed indeed destined for only great things. His portrait by Sir Peter Lely shows him in his prime, languidly confident as a romanticized warrior in half-armor.

In another era, perhaps he would have had that splendid destiny, but the hedonism of the Restoration was his undoing. Rochester was one of those unfortunate people for whom alcohol truly was poison, and in a time when heavy drinking was expected, he literally could not refuse. He could sink into entire lost weeks of drunkenness with his boon companions in London and at the court, then retreat to his wife in the country to struggle back to a semblance of sobriety.

An even greater curse came in the form of syphilis. The “pox” is the dark side of all that Restoration merriment, and most of the court (including the king) was afflicted with venereal diseases of one kind or another. Though there was much blustering gallows-humor about it, the so-called cures of mercury baths and enemas and hot pokers to cauterize the sores must have been harrowing. Nor did they work. Medical historians now believe that, based on his symptoms, Rochester may have become infected on his Grand Tour to the Continent while only sixteen or seventeen–a dreadful souvenir. For the rest of his short life, the double demons of alcoholism and syphilis racked his slender frame and tormented his mind.

Yet Rochester continued to embrace the 17th c. definition of a libertine as one who seeks pleasure freely, wherever he found it, whether with his wife, playhouse actresses, or the occasional other man. The other side of this sexual exploration was guilt and remorse, tangled with religious quandaries and general insecurities about his own self-worth. Always a gifted writer, he could compose both beautiful love poems to his wife and graphic, profanity-laced pornography. Other poems contain mocking laments for his own waning sexual prowess, and rants of misogyny blaming women–all women–for poxing him.

His friends watched his decline with alarm. Not comprehending the reasons for it, they saw only behavior that seemed to border on madness. His once-genial humor became perilously dark, and he pushed even the king to the limit with increasingly scurrilous poems that libeled not only the royal mistresses, but Charles himself. With a less indulgent ruler, these poems could have landed Rochester in the Tower for treason, but instead, over and over, Charles banished him from court to the country like a bad child needing a time-out. Then, when the sting of the insult had passed and the king remembered only Rochester’s amusing charm, he would be forgiven, and permitted to return. During one banishment, he dared to return to London in the mocking disguise of a charlatan peddlar, selling potions and offering to cure infertility, much to the hilarity of those who saw through his costume.

More dangerous incidents followed. In 1675, after a night of drinking with friends, he staggered into a palace garden to where an extremely valuable glass chronometer stood. This was one of the king’s favorite possessions, but after issuing a drunken challenge to the chronometer, Rochester charged it, and smashed it to pieces. The king was furious, and once again Rochester was banished from court. Another night, a brawling street fight in Epsom resulted in the death of one of the participants–though Rochester, with his court connections, was not charged. 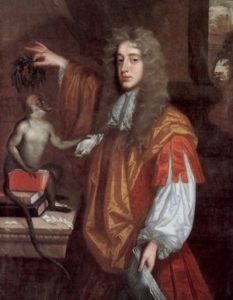 Yet when he was relatively sober and his pox was in remission, he could still be the old charming Rochester. When disease had already begun to mark his once-handsome face, he had his portrait painted again, but this time mockingly crowning a monkey with laurels to show the true value of poets. It’s a testament to that charm that his many friends–among them Nell Gwyn, Sir Charles Sedley, the Earl of Dorset, and the king himself–always rallied to support and defend him. He in turn was a loyal friend as well, and he was praised for his kindness and generosity of spirit.

But not even Rochester’s spirit could withstand the twin diseases that plagued him. His health deteriorated dramatically, and by 1679 he retreated on his own to his country house. Uncertain of what death would bring, he endured the evangelical counsel of the famous cleric Gilbert Burnet. Finally, after great pain and likely mad, he died on July 26, 1680, only thirty-three years old. His pious mother swiftly burned most of his writings as pornographic and blasphemous, and Bishop Burnet just as swiftly proclaimed that Rochester had denounced his misspent life and returned to God on his deathbed.

His closest friends, however, did not believe this, and preferred to remember the earl as the charmingly complex man that he had been. The playwright George Etherege created a character based on Rochester, and his description serves as a succinct elegy for Rochester as well: “I know he is the Devil, but he has something of the Angel yet undefac’d within him.”

I hope you’ll also stop by my blog with fellow author Loretta Chase, where we discuss history, writing, and yes, even the occasional pair of great shoes: http://twonerdyhistorygirls.blogspot.com

This guest post was part of a blog tour for The Countess and the King. 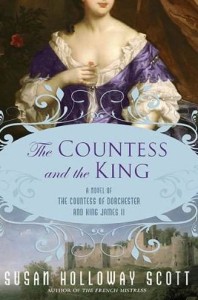 London, 1675: Born to wealth and privilege, Katherine is introduced to the decadent court of King Charles II, and quickly becomes a favorite from the palace to the bawdy playhouses. She gleefully snubs respectable marriage to become the Duke of York’s mistress.

But Katherine’s life of carefree pleasure ends when Charles II dies, and her lover becomes King James II. Suddenly she is cast into a tangle of political intrigue, religious dissent, and ever-shifting alliances, where a wrong step can mean treason, exile, or death at the executioner’s block. As the risks rise, Katherine is forced to make the most perilous of choices: to remain loyal to the king, or to England.