When you think of Romeo and Juliet, what first comes to mind: Shakespeare’s play, the 1968 film adaptation or one of the many beautiful paintings featuring the lovers? Or, perhaps, you recall sitting in high school English, Drama or Literature trying to decipher the archaic language while pretending to find the hidden meaning of it all. 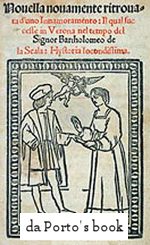 Before reading O, Juliet, becoming intrigued and doing further research, I had little knowledge of the legend at all. In fact, I assumed Shakespeare’s was the original. How wrong I was! This research has really opened my eyes to much, not just Romeo and Juliet related, but with the life of Shakespeare, or the person who may have published under the name Shakespeare… but that’s another story (and thoroughly researched article) altogether. Today, we are focusing on the origins of the legend of Romeo and Juliet:

Historically set in the early 14th century in Verona, the legend of Romeo and Juliet was not in fact officially recorded until 1531 by Luigi da Porto, an Italian writer who lived near Vicenza.

His book (translated from Italian) was titled Newly Found Story of Two Noble Lovers and is thought to have been inspired by a short story by Masuccio Salernitano (an Italian poet), though his characters were called Mariotto and Giannozza, while da Porto named his Romeus and Giulietta and added more characters that were adopted by later authors, including William Shakespeare.

Matteo Bandello, an Italian writer sometimes compared with Boccaccio, wrote several novellas which were basis for some of Shakespeare’s plays, including Romeo and Juliet. Quite obviously, Romeo and Juliet originated in Italy, though the author or orator of the original legend seems to be a mystery. 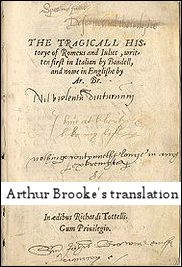 The first English translation is a poem called The Tragic History of Romeus and Juliet by Arthur Brooke and was published in 1562 followed quickly by another English version by William Painter in 1582 called Palace of Pleasure and a Spanish version in 1590 by Lope de Vega. The next borrower of the now famous tale became the most well-known since: Shakespeare’s play, Romeo and Juliet.

Shakespeare’s version appeared in the 1590’s though dates vary. Shakespeare himself played Fray Lorenzo in a 1596 edition, though several revisions occurred soon after. It is said that Shakespeare borrowed heavily from Brooke and Painter, as he himself never left England. 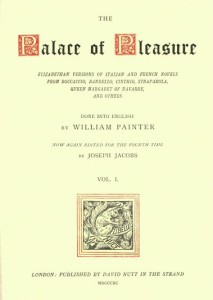 During the Restoration, one William Davenant, who claimed to be an illegitimate son of William Shakespeare and was in fact his godson, wrote a revision of Romeo and Juliet. He was a sometimes favorite of King Charles I and his court, though found himself imprisoned more than once for meddling in religious and political intrigues. 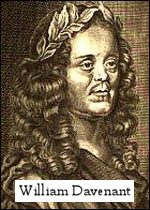 During the Commonwealth period, through influential friends, he was somehow able to open a type of theatre that featured toned-down plays to suit the new laws. Upon Charles II’s ascending the throne and the Restoration, he opened the Duke’s theater in Lincoln’s Inn Fields. The diarist Samuel Pepys noted the following in his diary regarding Davenant’s Romeo and Juliet:

‘It is a play of itself the worst that I have ever heard in my life, and the worst acted that I ever saw these people do; and am resolved to go no more to see the first time of acting, for they were all of them out more or less.’

In 1679, Thomas Otway’s The History and Fall of Caius Marius depicted two Roman senators fighting for political control while their children, Lavinia and Romeo were lovers much the same as Shakespeare’s characters, though used less than 1/3rd of his lines. Because of the political agenda the play offered, alluding to the Catholic situation with the Duke of York, the play was immensely popular and rendered Shakespeare’s version absent for nearly 70 years.

The next version on the rise was by Theophilus Cibber in 1744 and used material from both Otway’s play and The Two Gentlemen of Verona. An oddity of his play was the fact that he played Romeo himself and cast his 14 year old daughter as Juliet. David Garrick, the next playwright/manager to take on the play was appalled at the performance, though he felt Jenny (the daughter) had immense talent. 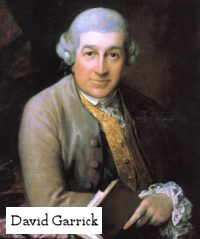 David Garrick, a British actor turned playwright/manager was first noticed for his portrayals of Richard III at Drury Lane. He changed the play considerably, taking out many of the rhymes and antiquated speech. Ironically, Cibber’s wife played Garrick’s Juliet and this version of the play ran for almost a century.

During the mid-1800’s there was a return to the poetic original of Shakespeare’s Romeo and Juliet. New theaters were built with gas lighting and the previous extravagances were abandoned. It was not unusual for females to play the role of Romeo, and in fact many actors turned the role down claiming it to be overly feminine.

Of course there continued to be many more plays, as well as, operas, musicals and ballet performances based on Shakespeare’s Romeo and Juliet, however, the 20th century brought something new to the fold: motion pictures. IMDB (International Movie Database) indexes more than 34 movies based on the legend, the most popular being made in 1938, 1968 and 1996. 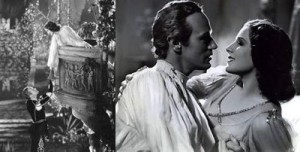 The most loved film is Frank Zeffirelli’s 1968 version starring Leonard Whiting and Olivia Hussey (raise your hand if you saw this in high school). The only controversial part is Hussey’s nude scene, as she was only 15 at the time, though, as my 10th grade teacher pointed out: they were married so it was okay – then wheeled the TV around and waited for the scene to be over. 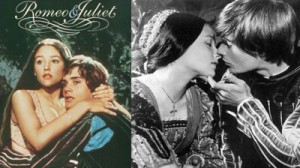 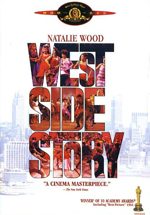 West Side Story is perhaps the most popular musical. It is set in 1950’s New York City and is based around rival gangs and intended to have cultural and political innuendos, as these issues were making headlines in the news at the time. It was made into a film in 1961 starring Natalie Wood and Richard Beymer.

The 1996 Film, Romeo + Juliet, with Leonardo DeCaprio and Claire Danes is another modernized version and used rival corporate businesses and guns instead of warring families and swords. Though the film won several awards and was financially successful, many Shakespeare fans shook their heads at such a leap from the original. 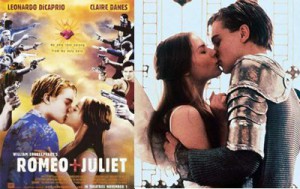 To wrap up this article I would like to ask you: Which version is your favorite? As for myself, I love Robin Maxwell’s novel O, Juliet, which can now be considered the newest in versions of the legend and quite original in the bargain! 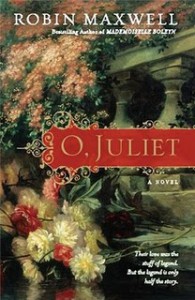 “Before Juliet Capelletti lie two futures: a traditionally loveless marriage to her father’s business partner, or the fulfillment of her poetic dreams, inpired by the great Dante. Unlike her beloved friend Lucrezia, who looks forward to her arranged marriage into the Medici dynasty, Juliet has a wild, romantic imagination that takes flight in the privacy of her bedchamber and on her garden balcony.

Her life and destiny are forever changed when Juliet meets Romeo Monticecco, a soulful young man seeking peace between their warring families. A dreamer himself, Romeo is unstoppable, once he determines to capture the heart of the remarkable woman foretold in his stars.”