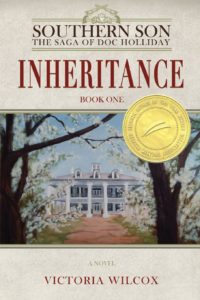 Before reading this immensely detailed novelization of the early life of John Henry “Doc” Holliday, I had only the 1993 film version of his character in mind (played by Val Kilmer), and a steampunk fantasy novel I reviewed for the May 2013 issue of Historical Novels Review—The Doctor and the Rough Rider by Mike Resnick—in which to form an opinion of the legend. Neither compare in substance to this novel, Inheritance: Southern Son: The Saga of Doc Holliday, nor I heartily believe (though have not yet read) the next two installments: Gone West and The Last Decision. What I didn’t know is that Doc Holliday, John Henry Holliday, was a fascinating man before becoming a by-word of the Wild West.

From his early years as a privileged only child, John Henry grew up in Georgia in the midst of the Civil War and the Reconstruction to become a highly educated young man, family oriented and the very definition of a gentleman’s son. His only demons it seems are his worries over his mother’s illness, his desire to live up to his father’s expectations, and later his complicated relationship with his childhood sweetheart, Mattie. Through his adolescence and young adulthood John Henry makes many mistakes, and though his actions may not always seem commendable, he retains the charm and wit the casual observers appreciate, and the loyalty and courage those close to him admire.

Upon my swift reading of Inheritance I found his story and history fascinating—especially the family tree in the front of the book, linking the Holliday family to that of Margaret Mitchell. How does a Western bad-boy fit in with the most popular Southern author of the 20th Century? This is the subject of the lecture Victoria Wilcox so eloquently presented on June 1, 2013 at the Margaret Mitchell House Museum in Atlanta. I’ve seen the museum many times while driving through Atlanta, but this was my first official visit. While I didn’t go on the house tour, I did stop to read the placards along the hall that leads to the lecture room, and the entire place exudes an antebellum atmosphere.

One of Mrs. Wilcox’s questions to the audience was, “How many of you have read Gone With the Wind?” I, for one, had to shamefacedly keep my hand down, as I have only read excerpts from an abridged version via my 10th grade Literature class, followed by a viewing of the movie starring Vivien Leigh and Clark Gable. Even die-hard historical fiction fans, and Georgian-born ones at that, have not read everything. Despite my lack of immediate knowledge, Inheritance nonetheless explains in part the connection between Doc Holliday and Margaret Mitchell in the Author’s Note (along with a Family Tree) and there is also more information on the author’s website, www.victoriawilcoxbooks.com. It seems, however, that the most compelling story is yet to be told in the two future installments of the Southern Son Saga.